“Psychologists generally define forgiveness as a conscious, deliberate decision to release feelings of resentment or vengeance toward a person or group who has harmed you, regardless of whether they actually deserve your forgiveness.”

I have had someone commit some minor offenses that were very easy to forgive, such as being late to meet with me or forgetting the bacon on my quarter pounder with cheese, well, actually…yeah, still a minor offense. On the other hand, how do we handle a MAJOR offense, such as a person who murders a loved one or someone who has abused us, or harmed the people we love most? This is not as easy, but I will argue that it is just as important to forgive these type of offenses.

Before you get your hackles up on this one, let’s consider what I don’t mean. I don’t mean that the person should not take responsibility for their actions or receive the consequences, we are simply no longer holding on to the anger and desire for revenge. I’m not sure who said it first, and I believe I quoted this in a previous article, “Holding on to anger is like drinking poison and expecting the other person to die.” I also like Mr. Miyagi’s quote in regard to Daniel wondering if revenge is a good reason to learn karate, “Danielson, you look revenge that way, start by digging two grave.” 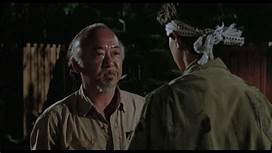 The following Ted Talk by Katy Hutchison speaking about restorative justice is one of the greatest human examples of the power of forgiveness and how healing it can be for both people involved.

One of the quickest ways to resolve conflict, show your love for other people, and restore relationships is to engage in the selfless act of forgiveness and offering grace to another even when they do not deserve it. Most people, even after justice has been dealt, will say that it does not take away the hurt they feel about the loss of someone due to homicide or the mental pain and sorrow that come in the aftermath of abuse. However, think of the freedom that comes from taking the power away from the offender to control how we feel about the offense, because let’s face it, no everyone comes to the point of remorse or feeling sorry for the wrong they’ve caused us. Consider how powerful your forgiveness could be also in the mind and life of the other person. When I have been forgiven for something I have done wrong when I did not expect the forgiveness, the feeling is indescribable. I see the forgiving individual differently and I even view humanity differently.

As humans, we can certainly work on forgiving others even when it’s difficult, however, we have a harder time forgiving ourselves. We are not guaranteed to receive the forgiveness of others even if we ask for it, so then how can we move past it? We have to be willing to forgive ourselves; no longer beat ourselves up over the wrong we have caused. Now, I am not saying we should not be sorry or remorseful for what we have done, but we should no longer dwell on it. We should move on in wisdom from the offending event we caused and never repeat it.

Even if you are not a Christian, please stay with me on this one, it may help you to understand forgiveness from a believers point of view. For believers in Christ, forgiveness takes on a whole new meaning.

17  “…But You are a God of forgiveness, Gracious and compassionate, Slow to anger and abounding in loving-kindness…”

God’s forgiveness and mercy are not limited when we seek it. He no longer holds the offense against us when we genuinely seek forgiveness.

Psalm 103:12-13 (NASB77)
12  As far as the east is from the west, So far has He removed our transgressions from us.
13  Just as a father has compassion on his children, So the LORD has compassion on those who fear Him.

Unlike us, He will no longer remind us of our offenses, even when we won’t let ourselves forget them. I believe many non-believers struggle with the concept of God’s forgiveness for others and for themselves. Some might say, “I would never forgive someone else for doing what I did, therefore, why would God forgive me?” Others have stated that it is just too simple. “If God is so forgiving then it means I can continue to do wrong as long as I ask for forgiveness.” If you are truly sorry for what you have done, you will not seek to do it again. We must turn away from the wrong we are doing. If I punch you in the nose, say I’m sorry, then immediately punch you in the nose again, I could not have been truly sorry for the first time I did it. Consider this verse in Romans:

Romans 6:1-2 (NASB)
1  What shall we say then? Are we to continue in sin so that grace may increase?
2  May it never be! How shall we who died to sin still live in it?

Just because we have been forgiven does not mean we should continue to do wrong because we will just continue to receive the grace of God’s forgiveness. God has not given us an excuse to continue wronging others. We should try harder to stop doing wrong to others because of the grace we have received.

I like to see God in light of parenthood given the verse from Psalm 103:13 above. I may get frustrated at times for the choices of my children. I still love them, even when they make horrible choices. There are still consequences for their actions. I may even be angry for a time depending on the severity of their offense. I never stop loving them and the very moment they come to me genuinely asking for forgiveness, I am very quick to offer it. In fact, some of those moments are the most tender as a parent, knowing that my child is learning, remorseful, seeking forgiveness, and seeking to repair our relationship. Let’s say my child does not seek forgiveness. I still love them because they are still my child. I have sorrow in my heart for them since they are not learning and they are not seeking to resolve the conflict, but I will forgive them nonetheless because I love them unconditionally. They may not deserve my forgiveness or even really want it, but they will get it because they are my child.

One of the most powerful acts of forgiveness happened on the cross.

While people nailed his hands to the cross, spitting at him, beating him, mocking him, gambling for his clothes, God in the form of a man looked up to the God of the universe, his father, and said the words in Luke 23:34. Even while people were shouting out words of hatred to him, he wanted mercy and forgiveness for them. For a non-believer, some of what I said just now is somewhat confusing. What do you mean Jesus, God in the form of a man looked up to God of the universe? Does that mean that God looked up to himself and spoke? In a sense, yes. Christians believe God is three in one, not three different ones. Consider water, ice, and vapor. They are all H2O, just in different form. There is God the father, God the Son, and God the Holy Spirit, all God, just in different form. Jesus was fully man and fully God when he died on the cross. Yes, he could have saved himself from the suffering and simply had angels take care of Him, but he didn’t. He needed to die, as a human but completely innocent and without sin on the cross, in order for God to forgive us for our wrong doing. If you are a non-believer with comments or questions about this, please ask and I can address them in a future article. I only hope that in my life when others wrong me or the people I love, I have the love and strength to say it and mean it as Jesus did. I am only human so I do not always get it right, but I try.

Who has wronged you recently? How are you dealing with it? Have you forgiven them yet? I encourage you to do so no matter the severity of the offense. I urge you to be the first one to take the first steps even though you are not the offender to resolve the issue. Forgiveness is therapeutic and mends relationships. Try it, you’ll see!